“Notch has been vital.”

Printworks used to be Western Europe’s largest newspaper printing facility, in 2017 the warehouse was reborn as a 5,000 capacity clubbing space. Renowned for its spectacular audio-visual shows, Rebel Overlay has been at the heart of the bold visuals which define the venues signature style. Rebel Overlay founder Spencer Heron shares his design story: 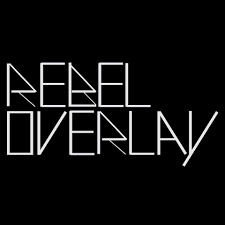 “We’re active VJ’s, often on the road with brands, events and artists. In the summer, you can find us touring with Ultra Music Festival’s Techno stage Resistance, and in residency at Privilege Ibiza. In the winter months, we’re at London’s 5,000 capacity club Printworks, where we’ve been resident VJ’s since 2018.”

“We had been working with The Hydra for several years producing visuals for underground electronic nights all across London. The Hydra became part of the core team at Printworks, developing and shaping the trajectory of the venue. They brought us on board very early in the process to consult on the visual design at the club. When we initially came onboard as visual designers, multiple smaller screens made up our canvas. However, in 2018 we decided to install a large 4m x 12m Roe Vanish 8 transparent LED which completely shifted our approach to video design at Printworks. This new screen was a completely different aspect ratio, which meant we had to start from scratch with our content design. It seemed like a good time to learn a new software to help us render high-end video for this huge new screen.”

“I attended Notch training in February 2018, and it quickly replaced many of my existing After Effects and Cinema 4D workflows. The real-time nature of Notch has accelerated our productivity, enabling us to see results much quicker than previously. Notch comes into its own, producing high-end glossy results in a fraction of the time of standard render engines.”

“Our design style has always had minimalism at its core. We always strive to blend visuals seamlessly with the lighting and aesthetic mood of a night. Our vision for the Printworks has been to create content that feels like it’s in the room. We approached creating this perspective based content in the same way we might a projection-mapped design.”

“Much of the content we create for Printworks uses a fixed camera angle. To create the illusion of floating in mid-air, we design on a black backplate without seams or borders. We often create 3D models or alembic animations and bring them into Notch where we texture and light. We animate our videos using the beat pulse modifier and render out as either 4, 8, 16 or 32 seconds loops. Our renders are enormous, but fortunately, Notch is a fast render engine. Creating content at this scale gives us the flexibility to manipulate visuals easily when VJing.” 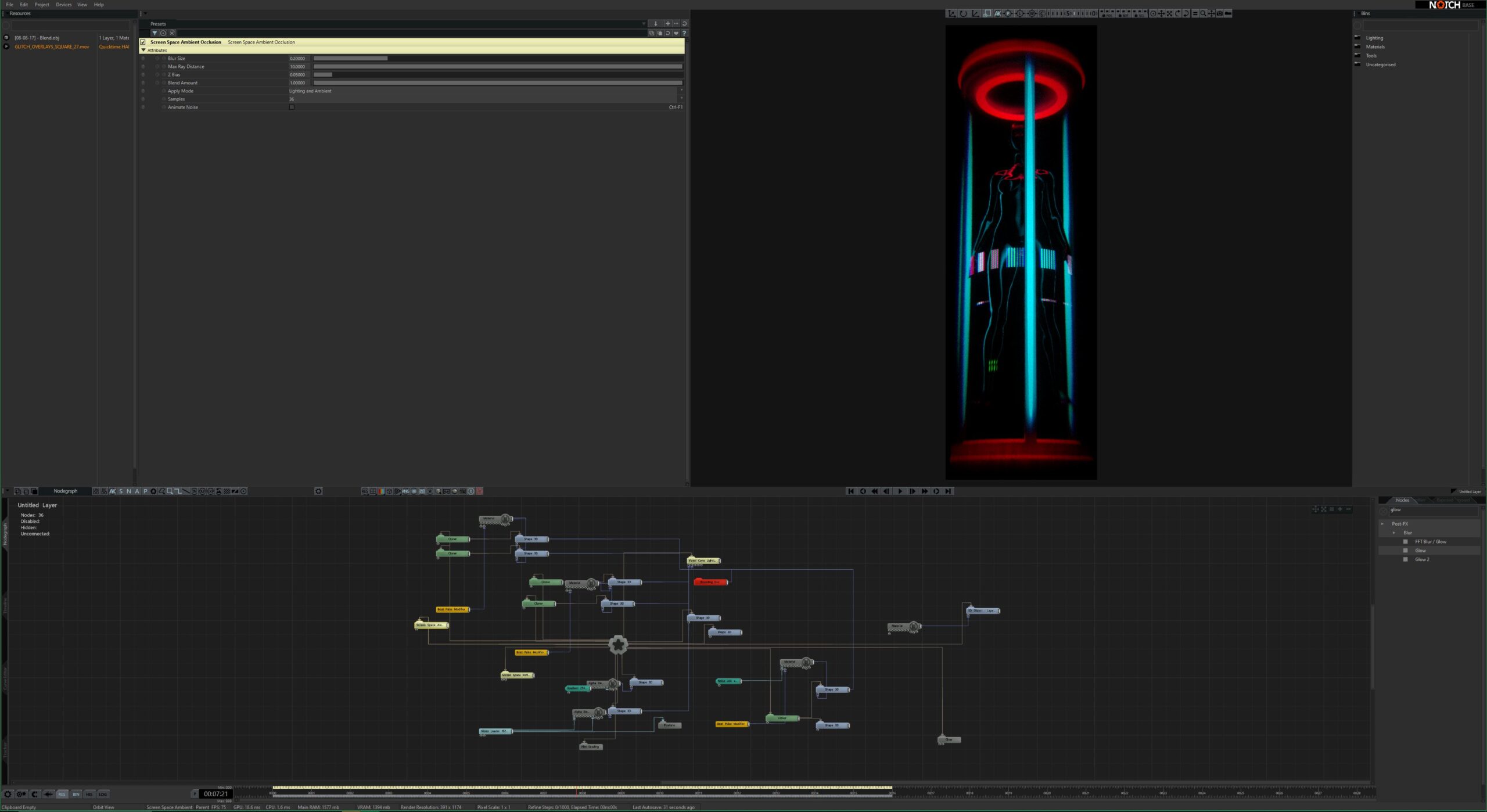 “The film Blade Runner inspired this look. We wanted to create a cryogenic chamber that would float on the screen. We used a video texture and a free model from French Monkeys asset pack. The cryogenic chamber was created and textured in Notch. We created the emissive lighting effect by attaching Shape 3D’s to a Voxel Cone Light. Beat Pulse Modifier is used to animate. We also used Noise Generator nodes to create futuristic fuzz effects on the chamber columns.” 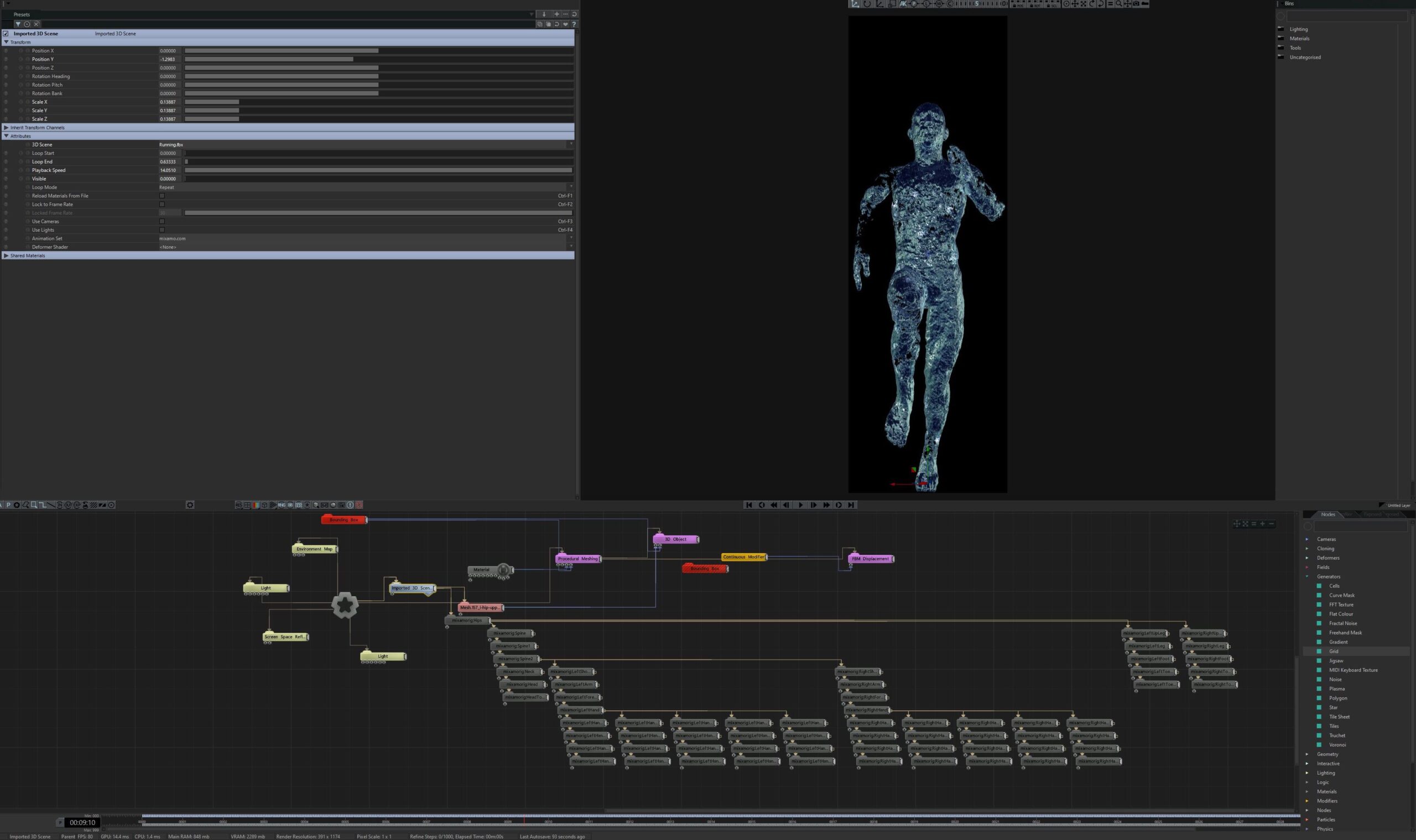 “This running man clip has become quite iconic at Printworks. It’s an incredibly simple look which we created using a .fbx from Mixamo, which we combined with a Procedural Meshing node. FBM displacement driven by a continuous modifier and an environment map creates the water-like effect.”

“Notch has been vital in rendering and pre-visualising all of the content we’ve created for Printworks. Our industry is fast-paced with quick turnarounds. Notch has enabled us to experiment with various techniques to get our desired looks.”

“The audience reaction has been incredible! Printworks is becoming regarded for its lighting and visual shows. The venue is massively popular on social media; however, Printworks is an immersive 360-degree experience that cannot be captured within a 15-second video. I encourage anyone who can, to come and check out the venue themselves. We’re just one of the core elements of the multi-sensory experience that defines Printworks. The visuals, the lighting, the kinesis, the sound, the lasers, the audience and the venue itself make up this exceptional clubbing experience.”