“With this workflow, we were able to create a living totem of energy”

Skepta collaborates with cutting-edge creative studio TEM and award-winning playwright Dawn King to create ‘a journey into the future of rave’. The immersive event was revealed at Manchester International Festival 2019 and received praise from the Guardian, BBC and Vice.

The Experience Machine (TEM) is a multidisciplinary studio. We create experiences and interactions that move people. We’ve worked with artists such as Beyoncé, Jay Z, James Blake, Coldplay and Hans Zimmer, created for cultural institutions such as London Design Festival, LACMA and The Manchester International Festival, and collaborated with brands such as Rag & Bone, Google, Gucci, Alexander McQueen, Intel, and Apple.

“One of our early ambitions was to take away everyone’s phones​. Skepta had a clear idea in his mind of how the audience would experience the performance. He wanted to connect with the audience and create a dystopian utopia. We thought about this idea of a democratic stage where Skepta could be viewed in the round.”

“The production process was long and complicated. We had to design the entire venue, including the stage and content design.”

“The stage took form as a two-storey post-industrial scaffolding which had the appearance of floating in mid-air. We designed the stage to house complex layers of visual and lighting technology. Using dozens of moving fixtures and ground-mounted lights we created a column of moving light. This column of light was shrouded by a 360 degree transparent LED surface to create a zoetrope, our canvas for the content design.”

“The unique, long thin room meant that the audience would have a controlled frontal perspective to the stage. That fixed perspective combined by with the visibility of the light core allowed us to create illusions of virtual objects being lit and interacting with the real light and real colour in the space. This dialogue between things rendered in a virtual plane, driving and being affected by things in the real world was part of the innovation brief from MIF.”

“The core represented the home of the Emergent character of Dambrin. Dambrin was an essential part of Skepta’s utopian rave concept – Fruity Loops creator Didier Dambrin inspired the name of this sentient machine intelligence. The omnipresent voice of Dambrin guided the guests from the ticket office and onto the dancefloor. Our whole narrative journey directed the audience towards this core.”

“To create the visual interpretation of Dambrin visible in the core, we used Notch’s suite of real-time 3D tools. Technically it was an array of radial geometry which we span in the 3D scene. The geometry was our canvas upon which we mapped various video sources. Careful control of the parameters created interesting zoetrope type effects which pulsed and blurred on stage. Syncing the rotation with the video frame rate in real-time, and slowly ramping up and through that point created wonderful rotational movements that played well with the rotational lighting.”

“Being able to update the camera perspective live allowed the core to feel like it was floating within the structure rather than flat mapped to a screen. With this workflow, we were able to create a living totem of energy, which became the connecting gesture through the show.” 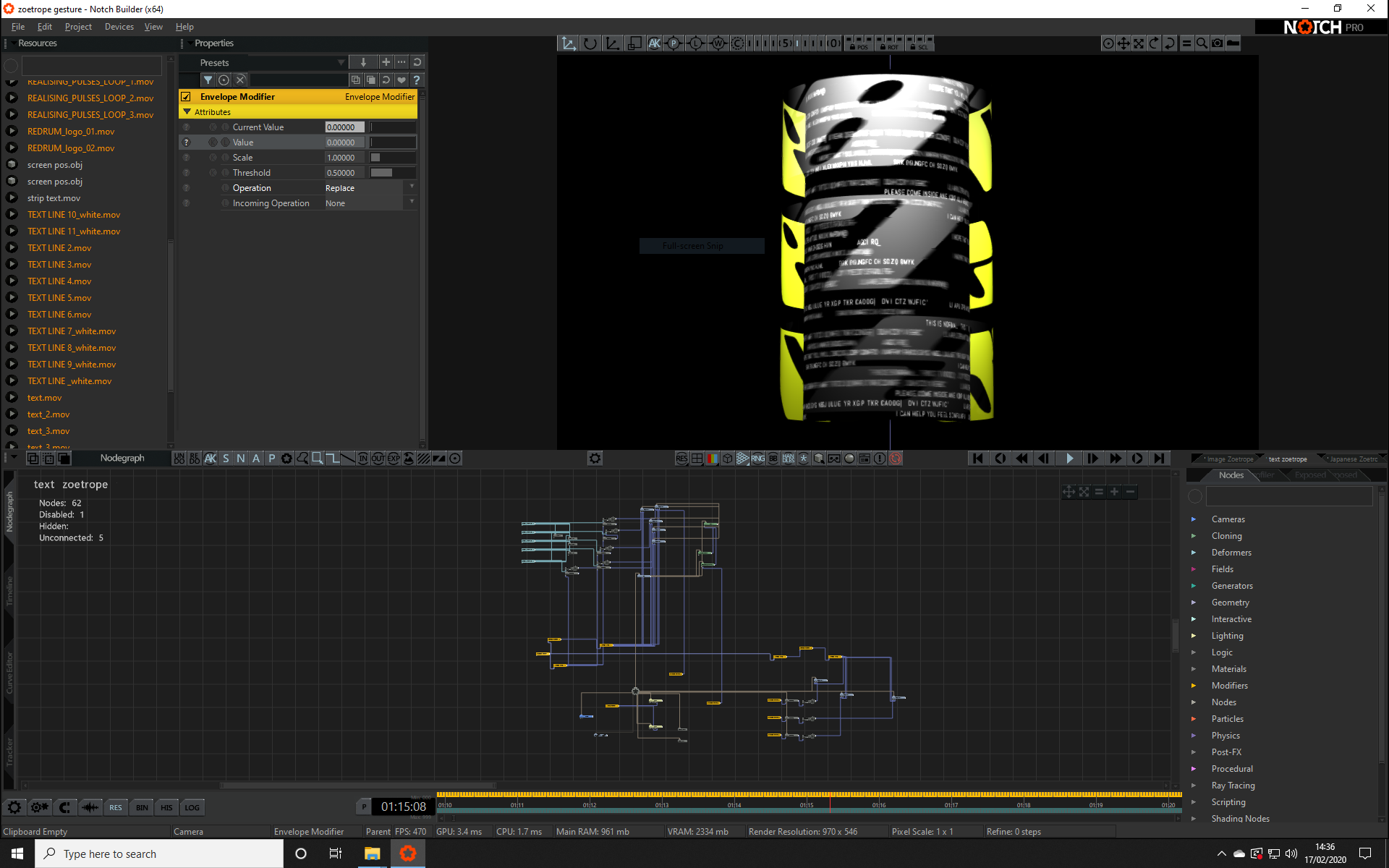 “A lot of this production is about disorienting the viewer. We wanted to recreate the experience of taking drugs, where you just sort of roll with what’s happening. At one point in the night, amidst the pounding techno, we created a ​meditative calming moment by flooding the room with light.”

“The lightweight form allowed Skepta movement around the stage in 360 degrees, emerging and disappearing into the central core, and the transparency of all elements emphasised the central core by creating radiating shadows and patterns, as video and light rotated, and interacted with the hard structural forms. I believe we created a unique visual experience which I hope made an impact on the guests and the rave scene.” 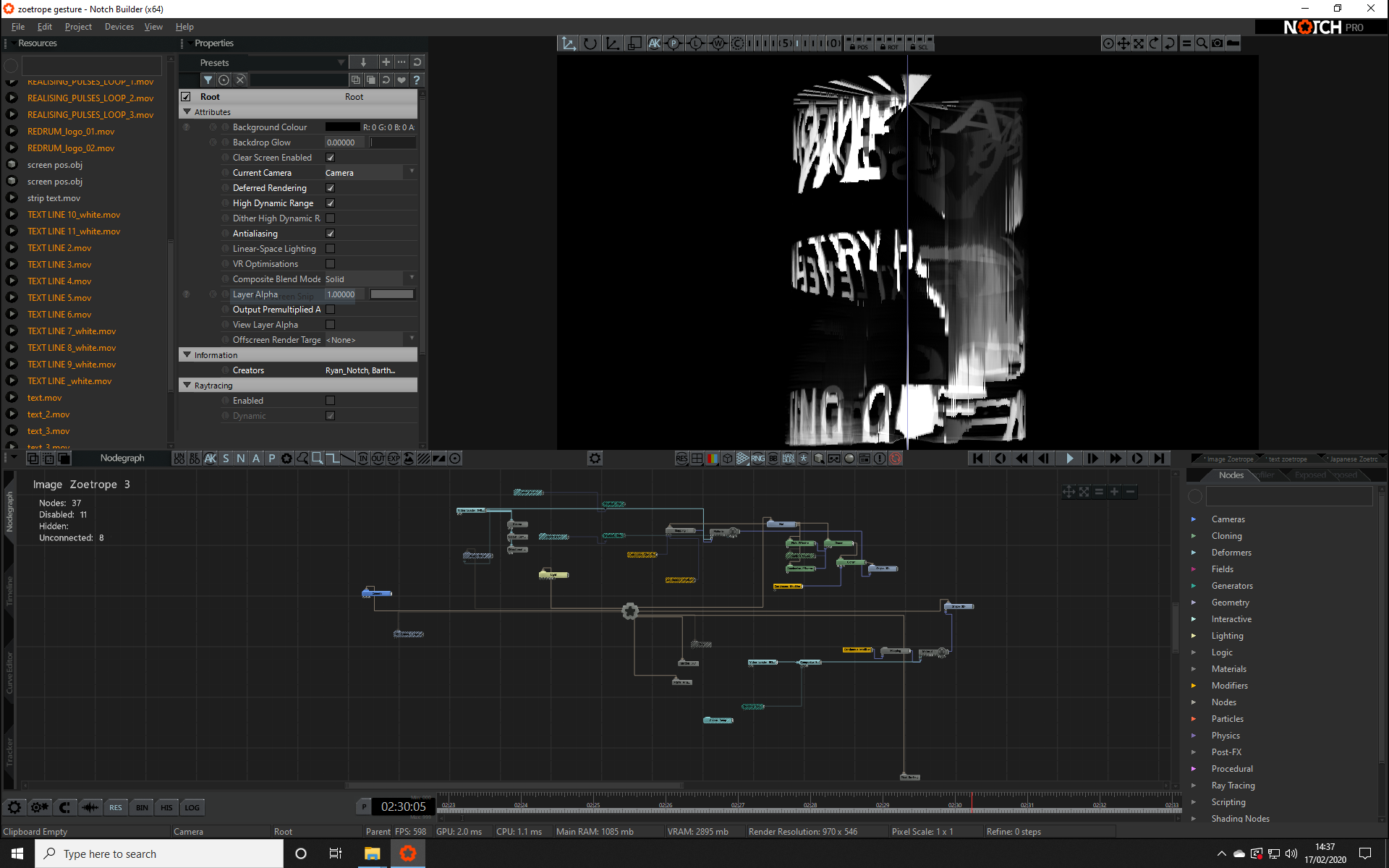