This year’s Glastonbury Festival unveiled a brand new stage from Block9, IICON. The twenty-meter head-shaped stage is a structure of megalithic proportions. IICON is an impressive architectural showpiece in and of itself, but at night it comes alive with bespoke content created in Notch. LED panels in the VR Visor glow and three-dimensional video maps onto the entire structure animating the surface of the head. Lead 3d artist for the project Mike Wilson shares his design story:

“I’m a freelance 3D artist and technical director working mainly on live shows. I’ve worked on all kinds of gigs, from operas to opening ceremonies, as well as designing tour content for bands such as Guns n Roses, Metallica, Snow Patrol and the Pet Shop Boys. I love working on live shows because of the instant feedback you get from the audience. My ideal is marrying all kinds of technology and art forms together to make a perfect show.”

Listen to the podcast where we chat with Mike Wilson about the building of IICON, and much more:

“I came onto the project to help Creative Directors of Block 9, Steven Gallagher and Gideon Berger prototype their designs of the physical stage. We created loads of variations on the ideas they had for how the head should look, and most importantly, what it represented artistically.”

“When we started to narrow down ideas, Notch became a useful way of visualising different screen and projection setups, and surface treatments. We were rendering pre-vis animations rapidly and using them in presentations and pitches during the early development of IICON.” 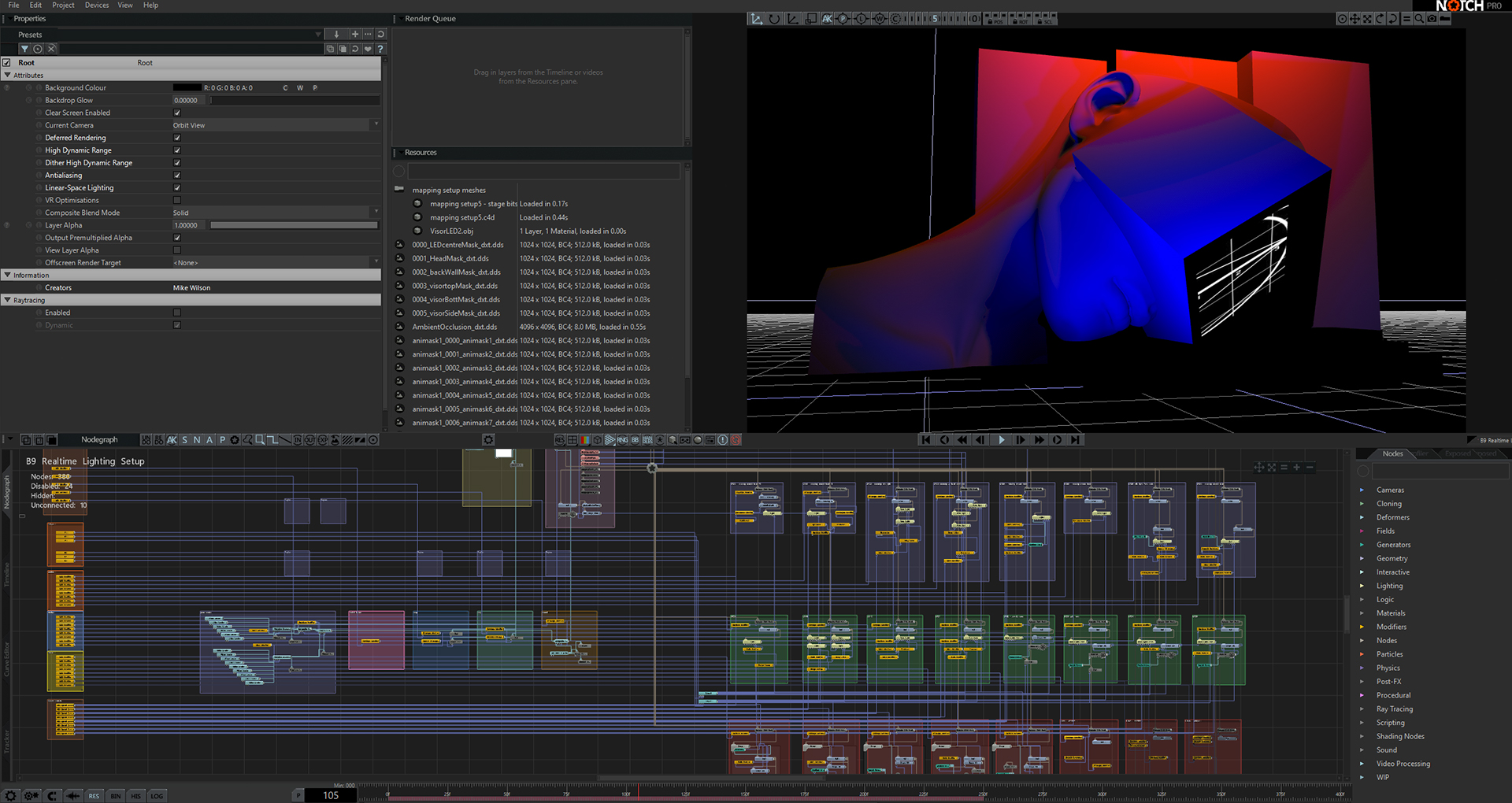 “Once we finalised the stage design, we moved onto the content design for IICON. With Glastonbury only four months away, we had to start our designs for four nights of bespoke content. We had two strands of design, one twenty-minute narrative piece called AV:3D, and looping material for the rest of the night while other acts were playing. We had some great people helping out, in particular, Shop in Bristol who were using Notch to generate loads of looks for the different nights.”

“AV:3D was a very complex edit by Dylan Byrne, using massive amounts of footage combined with bespoke 3D particle systems which I made in Notch. Using Notch and NDI Dylan could edit everything on a standard UV layout in Premiere Pro and After Effects, and stream that to the head model.” 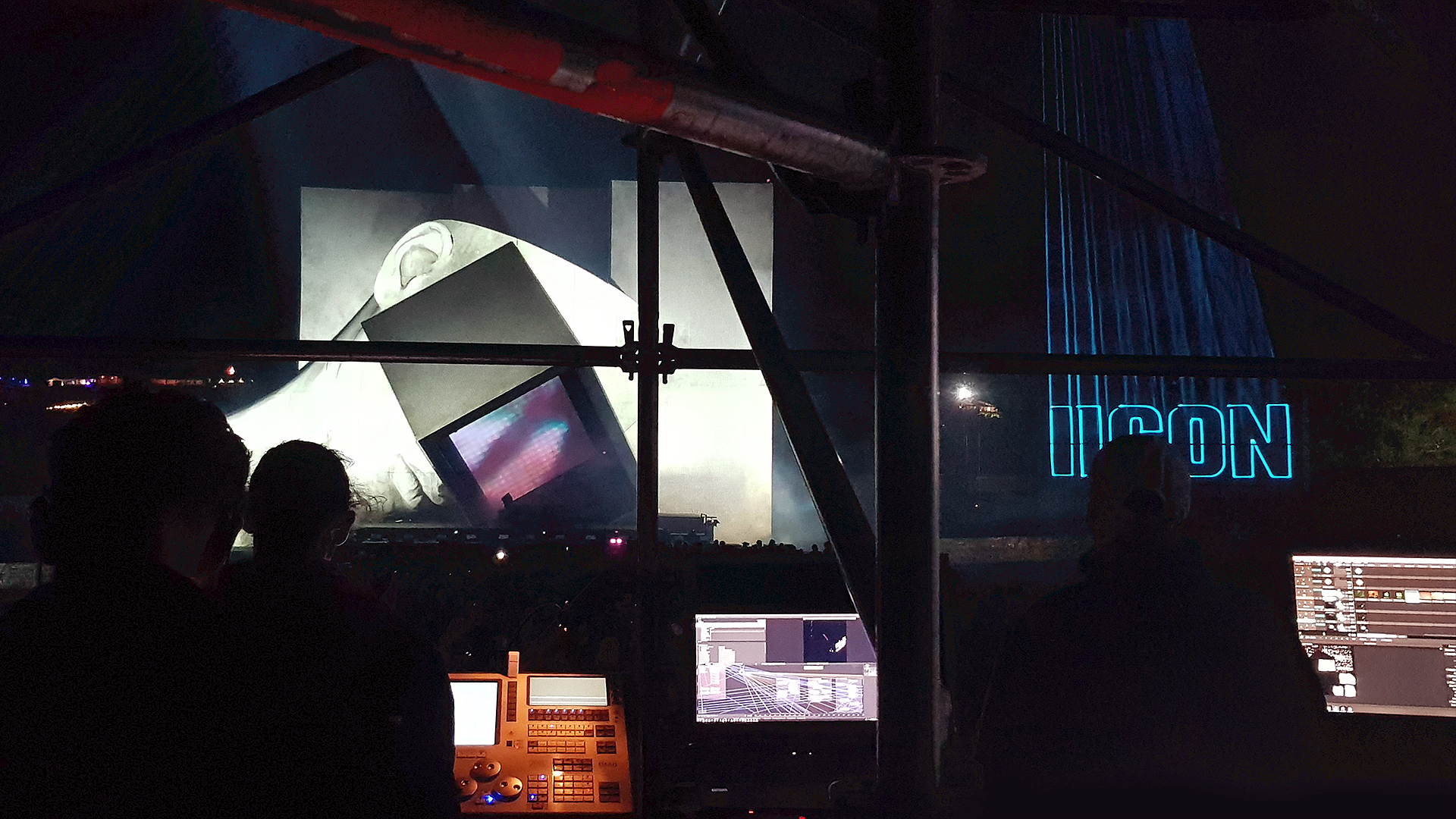 “I made other UV setups that allowed for different perspective mappings, the most complex of which used pre-comped layers that had three perspective mapped cameras combined into the standard UV template output. We used this whenever rendering anything that didn’t work directly as a render to UV.”

“Scott Millar and Bild studios provided the technical production and on-site set-up. Using a combination of Notch and disguise, they seamlessly mapped multiple projectors to the complex surface of the head; and brought together real-time lighting, I-MAG effects and VJ video playback.”

“Notch was the perfect swiss army knife, covering lots of roles without ever being either complex or inflexible. Notch allowed us to visualise the show, make content, visualise that content and relight and manipulate it live on the night. All in a ridiculously short amount of time!”

“I don’t think I’ve worked on anything that exceeded my expectations as this job did. Everyone from Block9 though to Bild Studios and the fabricators who built the stage did an incredible job. When people wandered in and saw IICON for the first time – phones were whipped out immediately for photos and selfies- which was in essence, what this piece of art was about.”