“The addition of Notch into our toolset has been a game-changer when working with musicians.”

Designer Alex Vlair re-creates a classic myth in his futuristic animation for The Holy X Moses Bélanger music video UV45. The Montréal based duo are known for their eclectic production & electric live performances. The 3D world of UV45 was created in Notch, giving Alex the flexibility to re-purpose the designs for live performances. Alex discusses his design process: 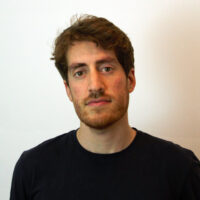 “This year, working with my close friend and successful independent 2D animator Greg Doble, we have started our own animation production studio in Montréal called Amontik Animation. We have worked on various projects ranging from 3D modelling for video games to compositing work for TV commercials. Our principal market, however, is creating visuals for music, such as Music Videos and live visual performances (VJing). The addition of Notch into our toolset has been a game-changer when working with musicians.”

“Through Moses Bélanger, half of the brains behind the track UV45, I was brought on board to imagine a music video to accompany the release of the track. After listening to the track just once I had a pretty good idea of the direction I wanted to take the video.”

“The track has three distinct parts, divided by two ‘drops’, and this made it easy to create a story arc. I wanted to find an aesthetic rooted in ancient mythology that could capture the power of the drops, which is why I looked towards using 3D-scan captured statues from the Louvre museum. I found that Antoine Coysevox’s sculpture, La Seine, was a perfect fit; exuding power with a pose that is dynamic yet at rest.”

“I use Notch principally because I find it extremely efficient when blocking out visual concepts. Because of the WYSIWYG workflow, I don’t have to waste time “testing” renders to see how my project will look in the end. I can try out different elements on the fly without destroying any previous work, which lets me get more creative with my ideas.”

“A second big reason why I’m using Notch is the flexibility between creating rendered graphics and real-time graphics. Although I’ve created this video to be rendered out, at the end of the day I will still have a real-time ready scene in Notch. We also do live VJing for the band, which means we will be able to recycle these visuals into a live set and create a cohesive experience between their live performance and their online presence.”

“Cloners and deformers played a big role for many of the effects; the snakes were made with Clone to Spline, and the magic mandala effect was also created very quickly by a series of cloners. Working this way lets me create and animate complex elements without leaving the Notch environment.”

“The end result is very close to my initial idea; I think that is mostly thanks to the speed at which I can arrange all the elements necessary to find the aesthetic I’m searching for.”